A male addax calf was born on April 5 to ‘Adeline.’  The addax was named ‘Perkins’ in honor of the students from Perkins Elementary that witnessed the birth of the calf while on a trip to the Zoo.  Talk about being at the right place at the right time!  At birth, the calf weighed 11 pounds and now weighs 20 pounds.

There is more than one reason Perkins is special.

“Addax are functionally extinct in the wild and zoos hope to one day reintroduce the addax back to their natural habitat and every addax birth helps us get one step closer to that goal,” said Anne Shimerdla, president and CEO of Blank Park Zoo.

Perkins took a few weeks indoors to bond with his mothers and is now available for viewing at Blank Park Zoo. 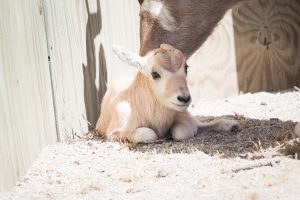